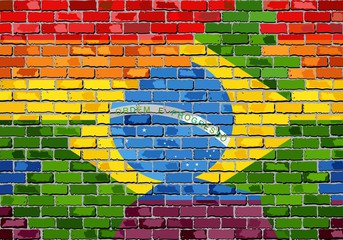 The other day I was standing in a long line at the bank when I suddenly remembered: as someone over 60, I was entitled to hop over to the caixa preferencial, which had a much shorter queue. A sign above the teller’s booth served as a helpful reminder: “This line is for old people—anyone as old as 60 or even older.”

“Coming right up,” I felt like saying. “Just hang on while I retrieve my walker and pop in my hearing aid.”

Along similar lines, the Brazilian novel I’ve been reading recently brought a new character into the story, a “very old man” with wrinkles criss-crossing his face, cocker-spaniel pouches under his eyes, and the weight of the world on his rounded back. A couple of pages later the author let it be known that the man was 60.

With insults and injuries such as these, I can’t be blamed for being a wee bit twitchy about my age. I turned 61 a few weeks ago, but damned if I was going to let anyone know. Not here in Brazil, where people “refresh” their cheeks and breasts and butts as one might rearrange the furniture in a living room.

For most of my midlife years, the guess-my-age game has given me a reliable ego boost. “You’re really 52? I would have guessed mid-forties.” “Fifty-seven? No way.” As recently as two years ago, I was propositioned by a handsome Italian man on the boardwalk in Cannes. I put a quick end to his nocturnal aspirations,  but still… ego boost.

In the past couple of years, though, something has changed. I look in the mirror and don’t see it—I have no frown lines or turkey chin, and my body hasn’t gone all sausagey on me—but clearly the rest of the world does. People are no longer shocked when they learn my age, and on my third day in Brazil one person actually guessed higher.

After that I stopped playing. I have no interest in seeing people’s un-shocked faces. Now, if someone asks me how old I am—and Brazilians often do—I just smile and say, “A gente pode mudar de assunto?” Can we change the subject?

Let’s face it, youth is a currency, and I don’t have quite as much coin as I might like. Before meeting Brazilian cyber-buddies IRL for the first time, I’m tempted to give them fair warning. You know, truth in advertising. “Hey, just letting you know that I’m 61, even though I feel like 25, both physically and mentally.” I actually wrote this to one young dude I was planning to meet for English-Portuguese conversation exchange. He never showed up.

To be fair, I’m meeting a ton of people who don’t give a fig about my age. (If anything, Brazilians seem less concerned about age-gapped friendships than people back home.) I’m making friends of all ages, just as I’d hoped. But I would be lying if I said I wasn’t peeved at this “betrayal of the flesh.” I have worlds of energy inside me. I’m ready to rock, roll, and samba. Why didn’t my epidermis get the memo? Ω

Edited to add: Today a woman in a second-hand clothing store asked me if I was 50 yet. She also told me that I speak better Portuguese than many Brazilians, so she’s clearly not a reliable source, but I’ll take what I can get. Ego off life support—for now.